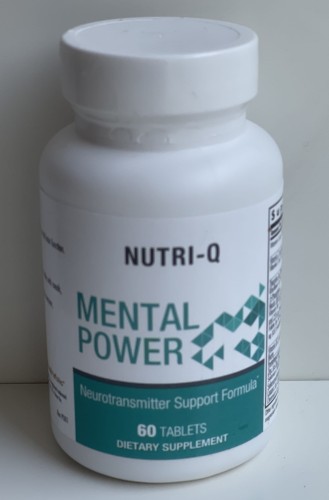 Availability: duża ilość
Dispatched within: 48 hours
Delivery: The price does not include any possible payment costs check the delivery methods
Price: €58.00 58.00

• Provides precursors for the formation of key neurotransmitters*

Ginkgo is an antioxidant that may help protect the body from free radical damage.* Extensive studies show that Ginkgo enhances circulation, which may support brain function.* Increased circulation also supports delivery of nutrients and removal of metabolic wastes. Eleuthero is an adaptogenic herb known to support immune response, energy and concentration.* It is widely used as a tonic to improve resistance to stress, restore vigor, and support memory.* Asian ginseng is an adaptogenic, tonic and nervine herb, traditionally used to boost physical and mental vitality, and speed up reaction time.* The active ingredients in ginseng, called ginsenosides, are known to stimulate the nervous system and the immune system, and support blood sugar within normal levels.* Gotu kola has traditionally been used in India and Indonesia for enhancement of energy.* It has been shown to support circulation and to be mildly sedating.* Gotu kola is not related to kola nut and does not contain caffeine. Bacopa is an Ayurvedic Other ingredients: Dicalcium phosphate, microcrystalline cellulose, silicon dioxide, stearic acid, croscarmellose sodium, magnesium stearate, hydroxypropyl cellulose, gum acacia. Suggested Use: As a dietary supplement, 1 tablet two times daily with meals, or as directed by a healthcare practitioner. Warning: Discontinue use if you experience muscle tension, cramps or headache. 10.2019 * This statement has not been evaluated by the Food and Drug Administration. This product is not intended to diagnose, treat, cure or prevent any disease. Supplement Facts BrainStorm® herb used for 3,000 years to support memory and enhance intellectual and cognitive functions.* It contains alkaloids called bacosides which have been shown to augment kinase, the protein involved in the synthesis of new neurons.*

L-Glutamine is the most plentiful amino acid in the diet, and has many functions in the body. These include involvement in cellular energy and growth, and as a precursor to GABA, an important neurotransmitter. L-tyrosine is an amino acid precursor to the catecholamine neurotransmitters epinephrine, norepinephrine, L-dopa and dopamine, and requires other nutrients such as vitamins C and B6 for proper conversion. These neurotransmitters help regulate mental function, stress response, mood, and other functions.* Tyrosine is also involved in thyroid hormone production. Acetyl-L-Carnitine has been shown to support nerve and brain function.* It is crucial for the transfer of intracellular energy and in the production of acetylcholine, important for learning, attention, and memory.* It has been shown to help prevent damage from alcohol, and support memory and mental performance in normal, healthy people.*

Choline can serve as a precursor to the neurotransmitter acetylcholine, and is known to support memory and cognitive function.* Inositol has long been studied and used clinically to nutritionally support mental function.* Phosphatidylcholine and phosphotidylserine are phospholipids, key components of cell membranes. Phosphatidylcholine is needed for normal brain development of the fetus, and is a precursor to acetylcholine.* Quercetin has been shown to support the integrity of mast cells, reduce the production of prostaglandins and leukotrines, and play a role in normal capillary permeability.* Cayenne pepper contains the active ingredient, capsaicin, which has been studied for its effects on circulation, metabolism and the nervous system.*

Many “usual” nutrients are also important to support brain function. For instance, thiamine (vitamin B1) and riboflavin (vitamin B2), both partially supplied in their “predigested” co-factor forms, have been shown in studies to provide support for neurological function, and both nutrients assist in amino acid metabolism and enzyme production, critical to neurotransmitter production.* Abraham Hoffer demonstrated over 40 years ago that niacin (vitamin B3) plays important roles in brain function.* Zinc plays a crucial role in hundreds of biological enzymatic processes, and is well known in Europe for its beneficial effects on brain activity.* Besides the antioxidant function supplied by many of the above nutrients, BrainStorm® also contains the antioxidants beta-carotene, vitamins B12, C and E, and trace minerals including selenium